I have a problem, people. My son is a habitual tub-pooper. It happened again today. About a half-hour ago, we were reading books. I said, "Charlie, when we finish this book, it's going to be time for you to take your bath."
He says, "Okay."
But then he kind of mutters to himself, "I gonna go poo-poo in the baf."
Me: "Charlie, what did you just say? Did you say you're gonna poop in the bath?"
Charlie, very serious: "Yeah."
Me: "No, that's not okay. If you are in the bath and you need to go poo-poo, you just say, 'Mommy, I need to go poo-poo.' And then I will take you out of the tub and put you on the potty and you can go poo-poo in the potty."
Charlie, nodding: "Okay, mommy."
Fast-forward to about 10 minutes ago. Charlie's in the tub. I'm cleaning the kitchen. From the bathroom, what do I hear? "Oh, that's my poo-poo." Sure enough, there is a very large poo-poo floating behind him in the tub. Argh! And it was premeditated!!!
Someone tell me what to do! I really can handle this whole parenting thing just fine for my first time, but I am baffled by this. It's like he saves up the poo for bath times. I'm getting so tired of fishing poo-poos out of the tub - so disgusting! What do I do??? 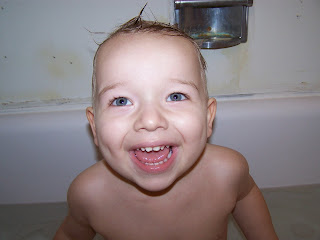 Charlie stopped naps altogether right around the time he turned 2, about 4 or 5 months ago. And ever since then, I've been in denial. When I got home from Rainrock 2 months ago, Shawn informed me, "Naps? Oh, he doesn't take those anymore." And, determined, I thought to myself, "Oh yes he does and oh yes he will."
Well, I'm officially admitting defeat. I have tried. I have tried and tried and tried some more. I have literally left him in his room, in the dark, for hours at a time and he just lays there and talks and sings for the ENTIRE TIME.
I've tried not going in there.
I've tried going in there.
I've tried leaving the door cracked.
Closing the door.
Putting some books in with him.
Putting some toys in with him.
No books.
No toys.
Singing songs.
Reading books.
Taking a bath with "calming" soap.
Turning the fan on.
Leaving it off.
Calling it just "quiet time".
Telling him he IS going to close his eyes and go to sleep.
Is this normal? It's not like he's being a stinker about it, either. He never complains or cries, he just doesn't seem to be able to turn himself "off" during the day. So, here before you today, I admit defeat.
And you know what confuses me the most? He's in there right now, ASLEEP. A random nap, just when I thought I'd never see another. Is there any rhyme or reason to these 2 year olds?
Well, I don't have any "new" pictures today, but I did find some really humorous old ones, of when Charlie and Blake were babies. Man, our kid was a beast. Remember, Blake was born 6 days BEFORE Charlie...
Here's Blake (in the carseat) visiting at the hospital right after Charlie was born: 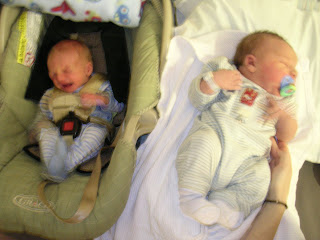 Here they are (Charlie on left, Blake on right) a few weeks old: 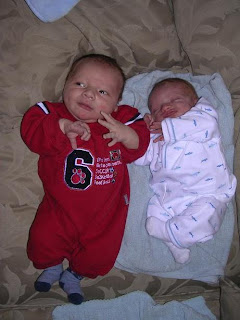 Charlie's behind Blake in this one: 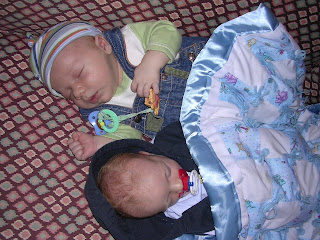 Okay, I don't know what the deal is with Blogger right now, but I'm not able to put the rest of the pictures on here, so I'll just end it here!

Found this on Christine's computer. I love that laugh!

Charlie's been sick, and I mean SICK. Poor little guy has been puking and running a fever for the past couple days. Yesterday, his fever was over 102 after I had already given him Motrin. He has just been laying around and cuddling lots. While it's nice to get those cuddles in, I wish I could take his illness away for him. It just breaks our hearts to see him so miserable. It's the worst feeling in the world to watch your baby suffering. 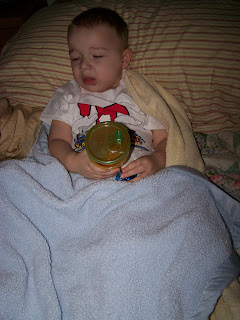 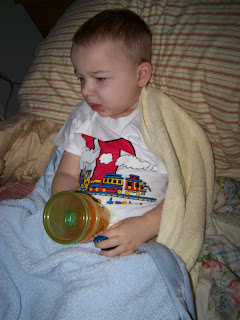 Shawn pointed out last night that while we feel so pained watching Charlie suffer, just think how painful it is for parents in 3rd world countries when they have to watch their children suffer and not be able to do anything for them at all. I can't imagine, and it's something I've been thinking about a lot since last night. That really breaks my heart. 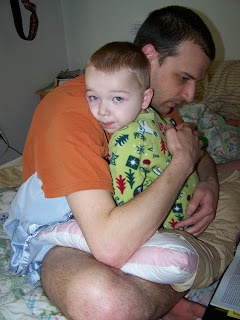 The good news is that things are looking up for Charlie today. He woke up this morning at 5:30 am throwing up, but since then he has improved significantly. No more puking, no more fever, and he's even playing a little.
Here he is a few days ago (before he got sick). He decided to take all the contents out of the bread cupboard and have a little picnic with himself. :) 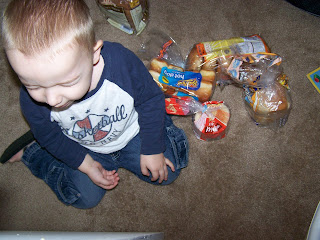