"You know, that red shirt with no neck and no arms!"

The other day, Charlie was going to help Shawn out in the garden. But first he decided that he needed his "farmin' shirt". He tried to describe it to us - it was "red, with blue on it, and some writing". It also had "no neck and no arms, and some strings hanging". So, I pulled out a few shirts and sweaters, then some coats and jackets. Nothing I showed him was the right one he was looking for. Shawn and I were at a loss to figure out what in the world he was talking about! We were all on a mission to find this elusive "farmin' shirt"!
Finally, after we'd inspected every shirt, coat, pair of pants, even pajama and hat in the entire house, Shawn sat down with Charlie and had him try to describe what the shirt looked like. Charlie described while Shawn tried to draw what he was saying on a piece of paper. You know, like those criminal suspect sketch artists? This wasn't helping either. Finally, Shawn says, "You try to draw it, Charlie."
You can see Charlie's drawing in the lower left section of the paper - and he added the strings to Shawn's drawing on the upper right. And there was his little Lowe's apron, clear as day! 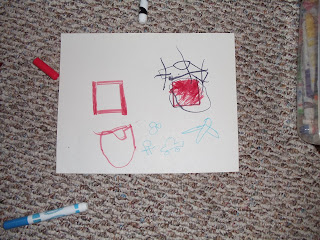 This is one of the things I really appreciate about Shawn. Where I would have likely given up after a few minutes and said, "Sorry, you're out of luck!", Shawn turned it into an adventure and made it fun, rather than frustrating! 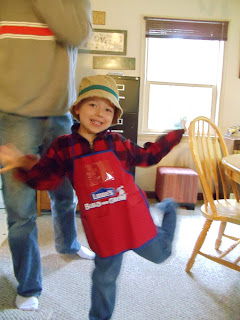