Those who know us well know that over the past few years, Shawn and I have been working very hard to become more environmentally friendly, less wasteful, more responsible, and really just more "natural" people. (Okay, small disclaimer - Shawn may be slightly more of a leader in this area. I'm sorry folks, but getting used to the idea of converting to a "composting toilet" is just gonna take a little more time for me. Go ahead, call me "prissy", but you try out the idea of poo-ing in a bucket and then throwing a bunch of sawdust on top, and tell me what you think.)

After many months of extensive research and hours-long environmental think-tank sessions held right here in our humble living room, we've done it! We have discovered a sustainable, "green", renewable, natural energy source. To be more specific, it's a wind turbine.
Now, listen. This is where this gets tricky. We want to share this idea with you, our closest and most trusted friends, but we also don't want this information to get into the wrong hands - people who may have the ability to sell our idea to the general market before we do. WE want to be the ones to make the first million on this idea. AND promptly spend that million on a bunch of plastic crap and junky electronics made in China.

Now, scroll down slowly and with discretion, and remember, this is big-time stuff. So, please try to keep it to yourselves.
*
*
*
*
*
*
*
*
*
*
*
Now, obviously there are a few small kinks we will need to work out. Like the necessity for food and water breaks, etc. At first we were thinking that "sleeping" breaks would also be necessary, but upon further investigation, we discovered that Charlie actually generates quite a bit of air while asleep. So really we just need to figure out a way to affix the turbine to his mouth securely enough that it won't get jostled while he's sleeping.

And then there's that sticky issue of "child labor laws" and what-not. Our current government, however, seems to be environmentally-minded enough that I think they might be willing to overlook that minor issue. Don't you?

A Bunch of Random Stuff 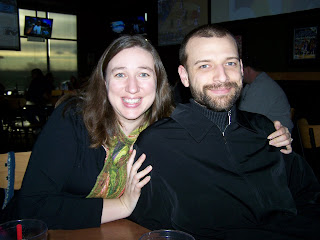 We went with Mike & Maryann and Mike & Christine - we are lucky to have such awesome people to hang out with that we also get to call family. 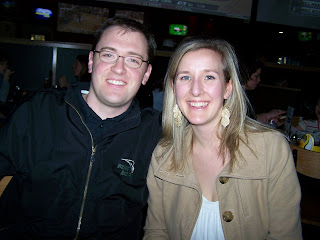 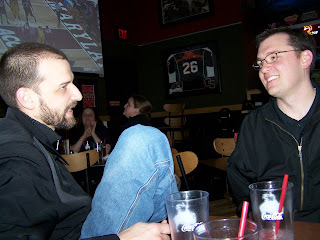 It was just too much fun to hang out, just us "big people". All our little people were being babysat. :) 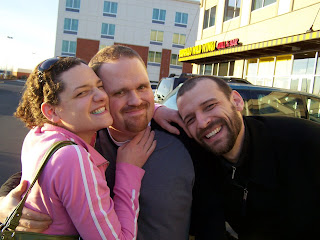 Charlie finally had his first OMSI experience - I've been meaning to take him for a long time!
Oma & Opa were there to provide lots of entertainment, of course. 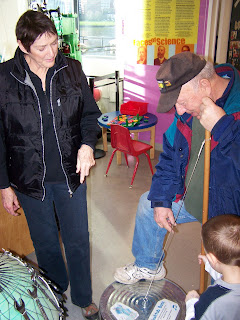 Opa & Charlie checked out the submarine. Afterwards, Charlie declared it was "boring". Oh well, maybe when he's a little older. Opa probably enjoyed it enough for both of them anyways!
Here they are running down the pier towards the sub. 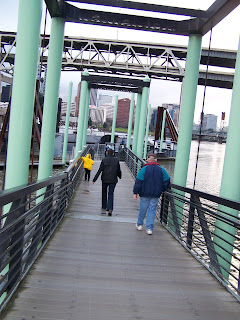 Now, tractor riding, on the other hand, is WAY cool. 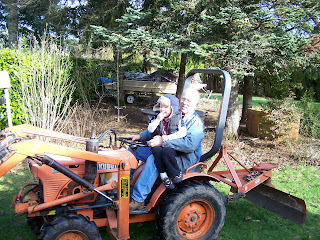 Last time we watched the Leiby girls, Amaya decided the kids should put on a Nativity Play.

Of course, Amaya was Mary and Charlie was Joseph. 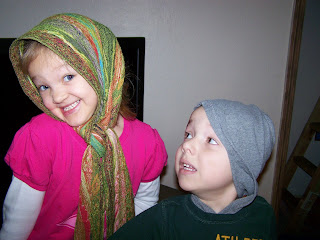 And...Tennyson, the angel. We taped feathers to her back as "wings". You can see them poking out over her shoulders. So cute! :) 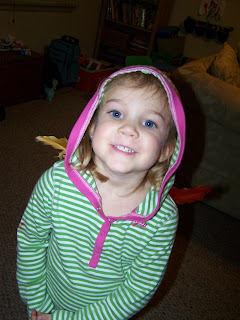 The week between Christmas and New Years, Charlie and I had the privilege of babysitting cutie Ava for a few days. What a sweetheart! 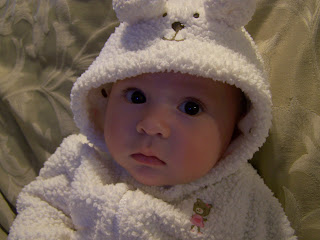 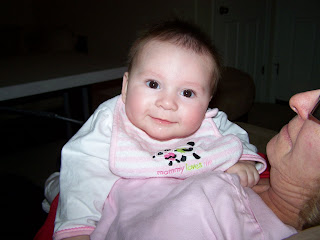 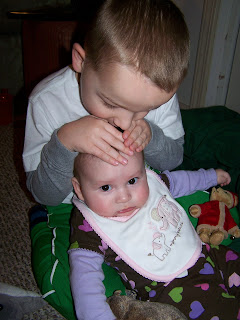 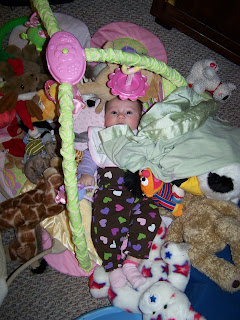 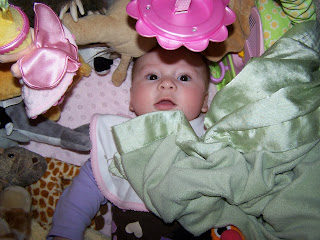 Teaching her how to hold toys: 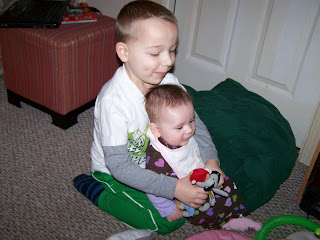 Ever since we had Ava in our house, Charlie keeps talking about "when" he gets his brother or sister, and how fun it's gonna be, and whether he thinks it will be a brother or sister (or both!)... Problem is, I'm not even pregnant yet! He's got a long wait ahead of him. :) 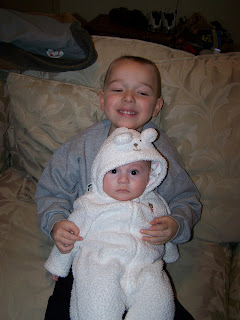 That same week, we got a little snow - so Charlie geared up (over the top of his PJ's) and headed out with Shawn to "explore". 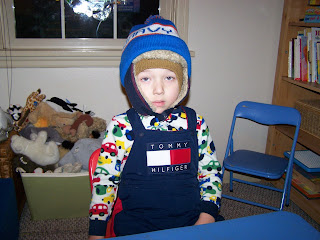 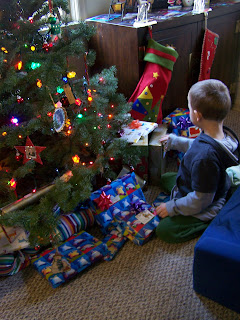 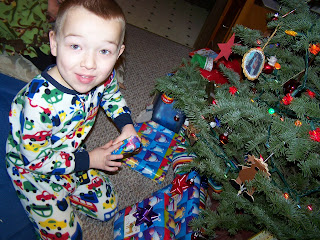 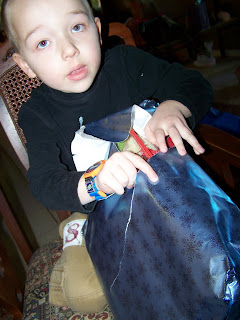 The Huntleys spent the night on Christmas Eve and so there were lots of little pitter-pattering feet (5 extra little pairs of feet, to be exact!) around on Christmas Morning - so much fun!
Some of the kids helping Charlie with his favorite "Sticky Mosaic" art projects. 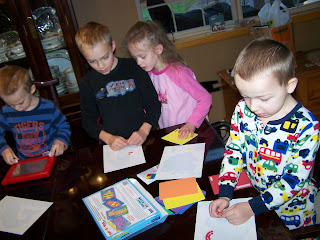 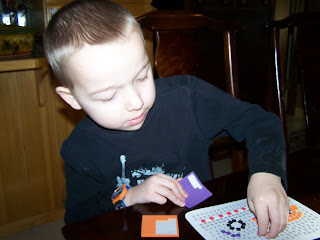 Another favorite - we spent a good part of the day painting these animals with glow in the dark paint. 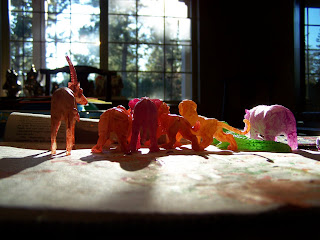 My sister - Aunt Melissa - made the most awesome quilt for Charlie. It's like a little map and it's got everyone's house on it, and roads and train tracks - so cute! Charlie has slept with it every night since he got it. 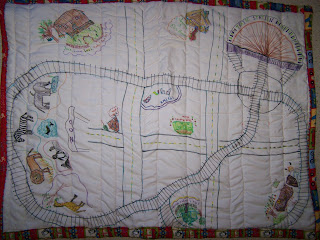 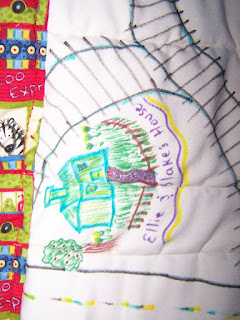 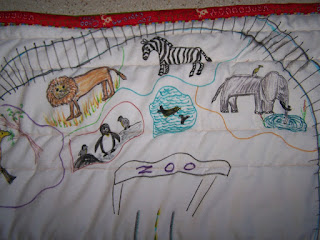 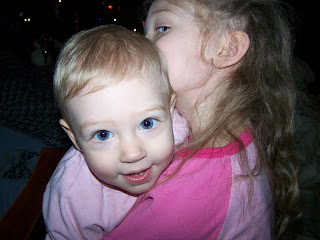 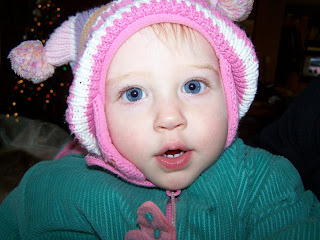 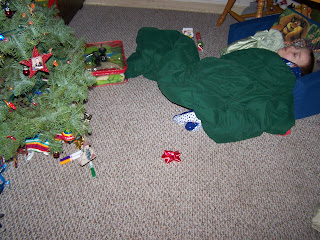 I just got back from a Home Depot run to pick up some "6-inch C Clamps" (ended up getting the wrong thing, but that's another story...), and this is what was going down as I opened the front door. Some sort of impromptu song-and-dance-while-getting-your-jammies-on gig.

And here's a little clip of Charlie explaining how something works to Shawn - it is especially funny to me because this is exactly what Shawn does for Charlie when he's explaining "how stuff works", pretty much a daily occurrence around here.

Charlie has so much fun with his daddy - wrestling, making up silly songs, making banana pancakes, working on chicken coop or house projects, and, of course, having Shawn draw out explanations of "how stuff works" (anything from underground aquifers to plant roots to how our bodies take vitamins out of the foods we eat - seriously, Charlie LOVES learning about this kind of stuff).

It's just lovely to watch these two together and I'm blessed beyond blessed to have both of them to call my own little family. :)